I went back to the drawing to work on the treasured banana muffins.  I opted to cut the Splenda by 50%, eliminate salt, use red palm oil in lieu of butter, use egg whites, and spelt flour again.

Unlike blueberry trial # 4 which had a very thick batter with spelt flour, this batter was quite runny.  They took an extra 2 minutes to cook through, and they do feel very moist, with a chewy consistency.  These muffins did not rise very high.

Boyfriend Unit noted that this time, he can’t detect the Splenda aftertaste that was present in the 2nd blueberry trial. Perfect!  These muffins clock in at:

I am quite pleased with these muffins, but not ready to post a recipe.  I’m still looking into cutting the sodium so stay tuned.

So that muffin recipe I was so excited to score the other week from my friend who makes delicious muffins?  These are nothing like her muffins.  Hers are baked to perfection and not overdone like mine. 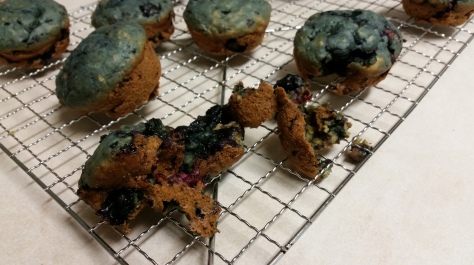 I’m working on a project to improve the nutritional content of my baked goods.  I will make this at least one more time to test my results.

In lieu of bananas, I used one cup of fresh blackberries and one cup of frozen blueberries.  This reduced the natural fruit sugar from 60 grams to 20 grams.

I really do love bananas.  (I used to think brown sugar was a food group so this is unsurprising.  There’s a story I could tell you about my brother in-law catching me with a bowl of brown sugar, and only brown sugar, for breakfast.)  I’m not giving up bananas or anything crazy like that.  Just enjoying them in moderation now.

Instead of using white sugar and table salt, I substituted granulated Splenda, an artificial sweetener made from sucralose and maltodextrin, and Half Salt, which is made of iodized salt and potassium chloride.

Splenda does not contain calories, fat, or carbs.  As this was my maiden voyage consuming Splenda, first I read Health Canada’s position on sucralose before trying it.  The Canadian Diabetes Association recognizes Splenda as a sweetener that diabetics can enjoy in moderation.  At least it’s not going to poison me out of the gate.  Onwards!

Half Salt contains 50% less sodium than table salt and I’ve been using it for a year without noticing any difference in flavour.

So how did the muffins taste?  Well hold on.  Let’s see the nutrition benefit first.

As for the taste, the only thing about these muffins that went wrong was I cooked them too long.  They had the texture and consistency of a regular muffin.

A feature of baking with both Splenda and Half Salt I really appreciate is that the substitution ratio is 1:1.  If the recipe calls for one cup of sugar, you use one cup of Splenda instead.  No need to figure out how to bulk up the recipe to compensate for lost volume. (EDIT: July 23, 2016, after 5 months of baking with Splenda I can state with confidence despite what the package says, I will never use the 1:1 substitution ratio. The less Splenda used the better, too much leaves a weird after taste.)

The granulated Splenda package has a note that baking time may need to be reduced, which I forgot, and that Splenda can withstand baking temperatures upto 232° C or 450° F.

I am satisfied with this experiment and excited to try it again.

While researching the pros and cons of alternate ingredients, I saw various mention of bad taste or weird side effects.

Have you noticed anything strange about cooking with non-traditional ingredients?