Eureka! I have done it!  I have finally made Rice Krispies squares! Fourth attempt was successful. There was no burning or marshmallow shrinkage this time. 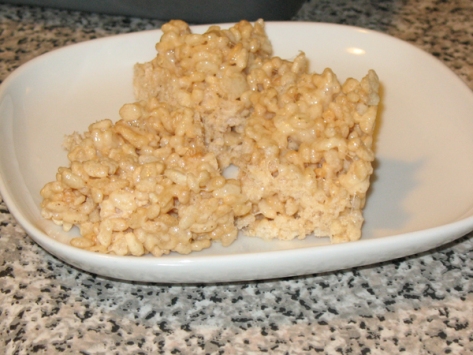 Am so happy. Never making these again! 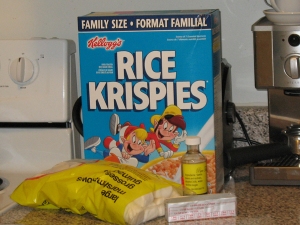 2. In a large glass bowl melt butter for 1 min.

3. Add marshmallows, stirring until evenly coated. (I cut the marshmallows in half first.)

4. Microwave on High until melted smooth (it took 4 minutes, stirring every 60 seconds).

Wow making these sucks. It’s gooey and sticking to everything, ugh!!

5. Stir in vanilla, then stir in cereal. Hmm. This is the largest glass bowl that I have, and it wasn’t large enough. Yet another excuse to never do this again. 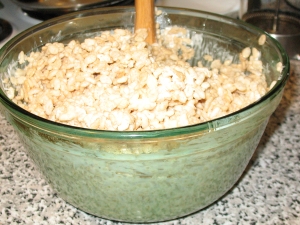 6. Press into prepared pan and chill for an hour.  I used a buttered spoon but it’s impossible to get this crap off the spoon and into the pan. Forget “square”. It is quite lumpy and not sitting flat in the pan, after 5 minutes I’m pissed off from fussing with it and just stick it in the fridge. 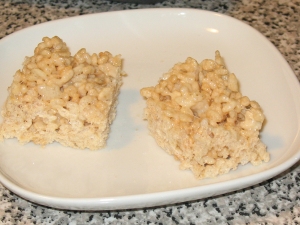 Verdict: They tasted pretty decent. I used a lot of marshmallows.

Boyfriend tells me they taste just like they are supposed to. We have a lot of cereal and another bag of marshmallows left over, and he has a different way of preparing them, so my next post might be written by him. 0_0

I was feeling very ashamed of my deficiency, but now I have crossed these squares off of my list of things to make. Never again!!

What supposedly-easy food item is your personal bane?

One thought on “Rice Krispies squares”