After being slightly underwhelmed by my first attempt at making pumpkin muffins, I went back to the drawing board.  I made some changes to the ingredient proportions and baking time:

The batter was really dry. I was a bit worried they wouldn’t settle into the muffin cups but I think they look cute.

These were baked 18 minutes (the original ones were in for 25). In retrospect 18 minutes was not quite enough, I’ll try 20 next time.

They were cooled in the pan 1 minute before being transferred to the rack.

Now this is the fun part. Use a cupcake corer (thank you M!) and stuff them with cream cheese frosting. 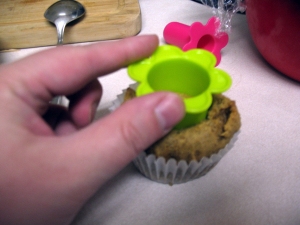 Woah this thing works way better than a knife. 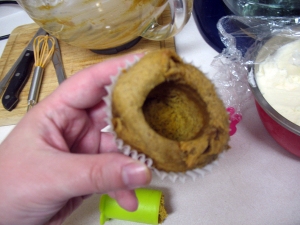 Verdict: Hmm. I liked this much more than round 1. Boyfriend-Unit loved them. I think there is still room for improvement however, so next time I’ll up the pumpkin ratio a bit, and decrease the cardamom.

Playlist: Katatonia – Into the White